I haven’t blogged in ages – there’s been too much to do, too much going on. Which, of course, is a total waste of blog content! When life is dull I have nothing to blog about and when life is a full and rich tapestry, I am too busy!

So I have decided to make up for it now. This is going to be a long post. So long, you might want to read it in instalments. So long that you will almost definitely want a cup of tea before you start. Go on, make one now – don’t worry I’ll wait.

Ready? Good. So I left Mexico on the evening of the 27th and had a very uneventful bus ride down to the border. What is it with Border Guards? Some of the most unpleasant people I have ever encountered have been at border control. The application to be a Border Guard must read as follows:

Question 1: Are you a complete and total bastard, with no sense of integrity, courtesy or respect for your fellow human beings?
If yes, please proceed to Question 2
If no, leave now and never darken our doors again.

The Mexican border guards were charging everyone $20 to leave the country. We had words: me in my poor and broken Spanish, and them in increasingly fast and agitated Spanish.

But is it for? I asked. It is a tax for leaving! They said. But there is no tax for leaving Mexico! Yes, there is! No there isn’t! Show me this in writing! There! Look at the poster on the wall – you see the picture of the visa – there it is! That poster says you need a visa – there is no mention of a tax for leaving. There is a tax! You think I am lying to you? (Very agitated) Senor, maybe my Spanish is so bad I don’t understand you. But what is the $20 for exactly? It is a tax for leaving! (This was going nowhere) But I have no money! Then you can go to the cash machine over there. Ok, I have some dollars, but I will need an official receipt and I would also like you to write both your names, so I can check later. He will give you a receipt. Great, thanks. No, no, he will give you the receipt. But he said you would? (Some fast, very agitated Spanish) Here! Sign this! But this is not a receipt? Just sign this! (The Border Guard had a scrap of paper, on which he had written “No tengo dinero” meaning ‘I have no money’ and he asked me to sign it. I signed. Now go away! He said, and I went.

The Belizean border guard wanted to know why I wasn’t staying in Belize, rather than going straight through to Guatemala. I felt like telling him about my last visit, when I was ripped off by the Belizean Border Guards who demanded a tax for leaving the country.

Soon Belize was behind me and we entered Guatemala and the worst roads I have experienced, since leaving Guatemala 6 years ago. The drive to Flores was like travelling in a cocktail shaker. Finally I arrived, shaken but not stirred, and went looking for food.

“What is the vegetarian platter?” I inquired. The waiter looked at me as if I was a complete idiot. “Vegetables” he replied. Obviously.

The following is a fictionalised account of a conversation I feel sure took place, but did not actually witness.

My vegetarian platter was served with a flourish and a look that said, “Well you ordered it”. It comprised: 1 boiled potato, quartered; 1 boiled carrot (halved); 12 green beans (skewered on cocktail sticks); 1 whole corn on the cob; some unidentifiable squash, quartered; rice and refried beans. It was ok! I like vegetables. But some seasoning would have been good.

It’s like Facebook – where, as I have said before – old friends turn up looking like their older and fatter siblings. The first person I saw was Guillermo, the once-cook is now an unlikely Security Guard, at about 4ft high, he’s wearing a gun that’s almost bigger than he is! Looking older and rounder – but just the same. I asked if I could leave my bags somewhere, “leave them anywhere you like” he said, gesturing towards the green space surrounding us “I hear the security here is excellent.” He remembered me and that was nice. I recognised the little girls selling fresh ground cocoa, they were, of course, the baby sisters of the girls I remembered well! Even El Retiro itself is a little older, grander and fatter than it’s former self. So many more Cabañas, and a huge new restaurant, but still kind of the same.

I found the manager, he was expecting me and gave me the keys to Matt’s house, where I will be staying. (Thanks Matt!)

The House of Spiders

I know, I’ve kind of given away the plot in the title. So you know what’s coming. It’s a great house, very atmospheric, the kind of place you would go gaga over if you saw a spread on it in the Sunday Supplement. It’s an ‘outside’ house – where even when you’re inside, you have the illusion of being outside. Unfortunately, the local fauna suffers from the same illusion.

It’s full of wildlife. Last night I stayed in the spider-infested main bedroom. Today I moved into the spider-infested loft: on the basis, that’s it’s even more ‘open’ and outside. If I’m going to have to share my space with the locals I would rather not be locked in with them.

There’s so many cobwebs, great long, thick cobwebs that stretch between the rafters – so I knew what to expect when night fell. I watched a video in the early evening, after 2 hours seated I got up and almost every step meant walking through newly spun cobwebs – the doorway to my room, the space between the kitchen counters – everywhere! On going to bed I spotted the first few monsters – the largest probably 4 inches across (and they do get bigger than that). But what can you do? Sleep in the spider-infested living room instead? I turned the lights out and practiced some calming pranayama.

Here in my new room, in the roof, I have one wall completely open to the elements and another half-open (overlooking the kitchen). The other two walls have open space under the roof. As well as some ominously large spider webs, I have also spotted two wasps nests and an enormous ants nest just outside. I really like ants – and these are big ones, I bet they eat spiders. So it’s good to know I have some allies up here!

The following pictures were taken in the last few minutes, from inside my room. 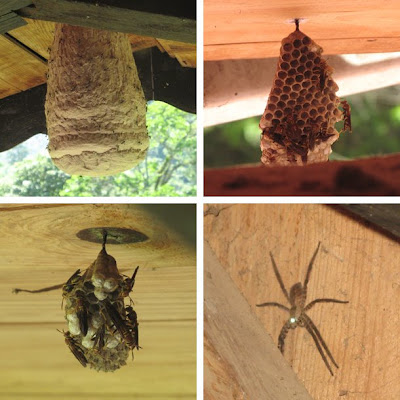 Before you start feeling sorry for me – here’s the view I will be waking up to every morning! 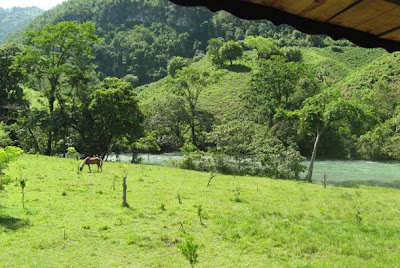 The hills, the house, the walls are alive! But it’s good to be back! Tonight I will go to the bar and start touting my Yoga classes. First class tomorrow.
at 02:08

Great to read your blog again! And the post was not that long it only lasted for one cup of coffee :-) What an adventure! Unfortunately, departure taxes, though incomprehensible, do exist!! They gotta tax you on all the swine flu air you breathed huh! As for your current digs, you’re certainly enjoying a stunning view. Lucky you! Just wondering if you packed a mosquito net (even though you did not mention any mosquitoes) it may be good to have one to prevent our crawling friends from coming in too close for comfort! Not sure what’s the lesser of two evils: sharing a room with spiders or scorpions? I once slept in a room infested with several families of scorpions. I was lucky they never touched me but was only able to handle the pressure of cohabitating for three days and was supposed to be there for months! When you mentioned Guatemala my eyes popped up and the theory of six degrees of separation came up to be proven again. It never ceases to amaze me how the world is so small and we are all connected. Just last week some close friends from the States went down to Guatemala for a week to visit their daughter who is volunteering for translation working with doctors and also helping in a charter school in the highlands. I’m awaiting their pics and stories. Keep the Yoga alive, enjoy your stay, be safe, and hope you find “What you want”! Here is a Poem on ‘What We Want’ by Linda Pastan
What we want
is never simple.
We move among the things
we thought we wanted:
a face, a room, an open book
and these things bear our names--
now they want us.
But what we want appears
in dreams, wearing disguises.
We fall past,
holding out our arms
and in the morning
our arms ache.
We don't remember the dream,
but the dream remembers us.
It is there all day
as an animal is there
under the table,
as the stars
are there
even in full sun.

Young or old, we all want the same things: peace of mind, happiness, a life without turmoil.
When we are young we think these things lie sometime in the future, and when we are old we think they lay in the past.

Glad you made it. Keep blogging.