I woke up Sunday morning with a filthy hangover. Drinks the previous afternoon had ended well into the early hours of the morning and during the course of the night I had rediscovered my love of Caribbean Rum. I had a moment’s peace, thinking I might just stay here all day without moving... then I remembered! I had to be somewhere in... oh no! Forty minutes! Because we were going out looking for Bull Sharks!

I hadn’t given much thought to where we were meeting, but was surprised when I realised it was Downtown. Still, I found a place to sit and patiently waited for my friends to arrive and wake me up again. J had his truck, which was fantastic, so our tanks were carried down to the beach whilst we staggered. All but two of us had been out the night before, so we made an odd, reservoir dogsish, kind of crew: swaggering down the street in dark wetsuits, dark glasses and self-pitying grimaces.

Arriving at the beach we geared up and started walking to our entry point. I can’t tell you how hot it is inside a 5mm rubber wetsuit, walking on soft sand, carrying a 20 kilo tank and full gear at 10.30am in the tropics, with a hangover. I have rarely been so happy to finally get in the water. And it was only once I got into the water that I really paid attention to where we were. Basically right out the front of the main beach in town. We swam along to Pier to get to our dive site. For the first part of our surface swim we were accompanied by excited children, but not for long. It was a good half-kilometre to our dive site. Which is a long way.

But finally we got there, and after a quick wave and head count someone shouted “are we going then?” and we quickly slipped beneath the surface. It was clear and cool down there, and as always, all became right with the world. If you don’t dive, then I cannot explain to you the feeling of absolute tranquility that comes over you as you drop gently beneath the waves. It’s still my favourite thing to do, ever, anytime, even (and in fact, especially) on a Sunday morning with a filthy hangover. 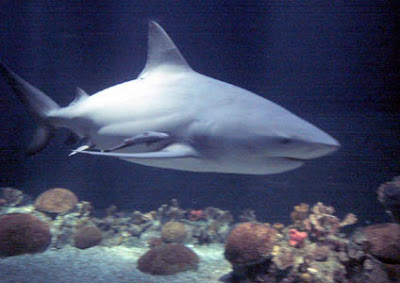 It didn’t take long, to find what we were looking for. Within five minutes we came across our first Bull Shark. They’re fat, monstrous, medieval looking sharks! With large mouths and a fabulous sinuous swimming motion. They were very relaxed that morning; just cruising the area and we were able to watch them for some time. The nearest coming within three metres of me, and at one point we were watching three at once. I don’t think any of us wanted to come up, even on our safety stop we could see the sharks circling below us! Once we reached the surface, after many excited squeals, and ‘oh my god”s and ‘how cool”s and ‘how many”s’, it was W who finally said, “We should probably get moving, it seems there are sharks in these waters!”

And so began the long swim back to the beach, needless to say, the hangover kicked back-in fairly quickly. When we finally reached the shore, I was reminded of Amityville Island and felt a bit reluctant to answer when a young father, with bucket in hand, asked me what we’d seen. But R was too excited and strolled cheerfully back along the sand shouting, “Sharks! Sharks! Lots of really big sharks!” to anyone who so much as looked his way. I couldn’t help thinking the holiday spirit was slightly dampened by our presence.

After carrying back, breaking the gear down and rinsing, I felt my last ounce of energy slowly drain away. I waved my goodbyes and was back in bed by lunchtime.
at 00:49