I am the Yoga Teacher! It occurred to me that I haven’t really blogged about that yet - so I thought I should. Well, my new career got off to a slow start. I planned to do my first lesson at 5pm on the 1st of July. I had 5 people signed up, everything was looking good, I was ready, with my lesson plan neatly typed up, bag of mats underarm... then at 4.45pm the heavens opened and the rain came down in torrents. Ah yes, The Rainy Season – I had forgotten about that.

I re-scheduled to the following morning, but was disappointed when just 1 person came to my very first class. They warned me that it rains most days at 5pm, so I decided to stick with the 7am class. For 2 days, no one came. People were telling me that this is too much of a party place and no one would get up that early, and I was starting to feel pretty disheartened.

Then, it picked up! The next day there was 2.... then 6... then one bright sunny morning I had 8 people, which was very exciting! Initially, I was teaching on some flat grass by the river, but as the rains kicked in, that location became too muddy. So I moved the classes to the terrace at the house, which is lovely – but it’s 'off campus' – so now I have to persuade the lazy backpackers to walk down the road. As a result, recently the 7am class became an 8am class! But my schedule is still very fluid, as the weather and the customers change.

There have been some interesting students and moments. Last week there were two people who extended their stay just to do some more yoga with me, which was a wonderful compliment. This week, there was a small, public-school girl, doing her first ever yoga class, who spoke mostly in capitals, and thought yoga was “aMAZing” and “JUST INCREDible” and “fanTAStic and “NEVer EVEN KNEW yoga could be like THAT!”

Of course there was also the serious young man in lycra leggings who huffily told me he preferred “proper yoga”. I asked what he considered to be proper yoga?
“Like they do in India,” he replied. I said that I haven’t been lucky enough to study yoga in India yet, and asked if he would tell me more about it.
“You know” he said “no-one telling you what to do – everyone does their own thing, at their own speed”. It occurred to me that if he wanted to do his own thing at his own speed, he didn’t really need to come to a class! But I didn’t say anything.

In the first week, by the river, there was a young cow that was very curious. One day, she came to class! She stood on the back row and watched intently for about 45 minutes. Finally, during the Balance Sequence it all became too much for her – she rubbed her nose against one of the girls, knocking over a very nice Ardha Chandrasana (Half Moon Pose). So I shooed her away (the cow, not the girl) – but the rest of the back row complained – it seemed they all liked her being there! The following day she was more restrained and just watched from the side (the cow, not the girl).

Yoga has been met with complete amazement by the local Mayans. None of them have ever seen yoga before and they are quite enthralled. The first day 4 gardeners watched, literally with open mouths.
“But what is Yoga?” I am frequently asked! Funny, that was the first question in our Final Exam for the Teacher Training – but I didn’t actually think I would ever get asked that in ‘real life’.
“It means union” I reply, “It’s an exercise, and a philosophy, from India”
“Where?”
“India, it’s a country in Asia”
“Oh, that’s a long way from here”
“Well, yes.”
“But what is it for?”
“Strength, flexibility, balance and happiness” I say.
“Oh” they say. “Is it just for tourists?”

Several of the Mayans have said they’d like to come – but it hasn’t happened yet! I also had a request from one of the ladies in the kitchen to come and teach a class at the Community Centre for a group of ladies and children. She said there might be 40 of them! Most of who don’t speak Spanish (let alone English). We are still in discussion, but hopefully one of our Mayan bartenders will come with me to translate. It could be interesting! Most of the women here still wear traditional clothes – I cannot imagine them in shorts! I can’t imagine them even owning shorts! I have this vision in my mind of 40 buxom Mayan chicks in Warrior 2, all wearing hand-woven full skirts, lace tunics and plastic slippers :-) So I’ll keep you posted on how, or whether, that happens!

I think Behemoth #1 has left home! It seems this house wasn’t big enough for the both of us. Behemoth #2 is still in residence and in revenge for destroying his digs (the Blue Blanket) he now likes to hang out at the top of my stairs, just next to the light switch – scaring the living daylights out of me when I am on my way to bed.

A smaller behemoth (Beast #1) seems to be stepping into the voluminous, but metaphorical, boots vacated by Behemoth #1; I am watching his progress with interest. 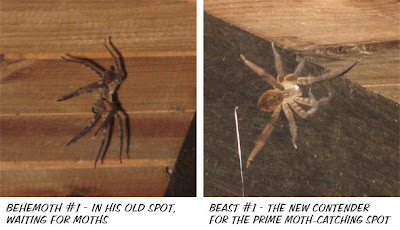 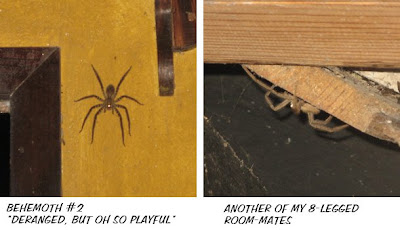 Two pikey scorpions are roaming, but not yet ensconced in, my region of the house. The smaller one was first seen in my room – presumably he was stopping by to introduce himself – I was not hospitable, but bravely swept him down the stairs. I suspect he is now hiding in the closet at the bottom of the stairs. The second, however, is out and proud.

The cats are all fine – they have recently formed a Barber Shop Trio, led by ‘Alpha Cat’, and they get together in the kitchen, for a sing, at about 4am, which is just marvellous. ‘Tom Cat’ was ‘done’ last week, to the great relief of everyone – so the house no longer smells of cat pee. He is furious and won’t even look at us anymore. ‘Small Cat’ was also ‘done’ and some kittens were aborted. She looks very small and forlorn now – but we are making a fuss of her and she seems ok.

The last house-mates I should mention are the possums, who come through the kitchen window and mix cocktails in the dead of night – they then get drunk and dance on the roof. I haven’t actually witnessed this because I can’t be bothered to get out of bed, but I hear them loud and clear. At least they shut the cats up. 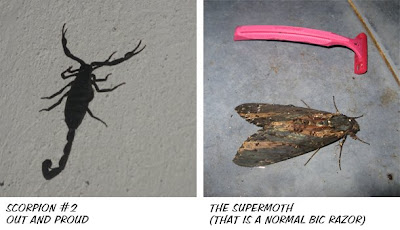 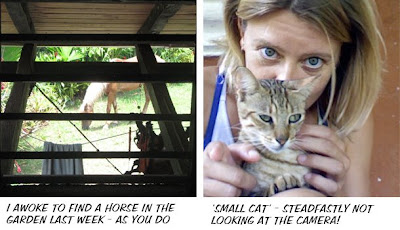 Life in the garden is also thriving – a large, totally groovy, caterpillar is living near the outside tap. So far, he has ‘burned’ both of my (human) house-mates but not me! I am too sharp. Several frogs abound, both indoors and out, which makes showering more exhilarating.

The herd of bulls from over the river have discovered the uncut grass in our garden is far superior to scrub on their side and are now regular visitors. This is particularly exciting when one to comes to the door for a look, especially if you are half-asleep and not really prepared to see a large bull standing in the open doorway. 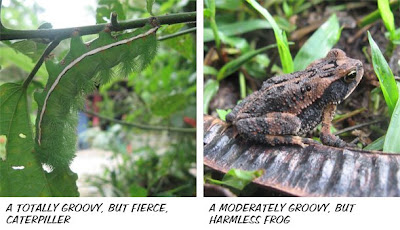 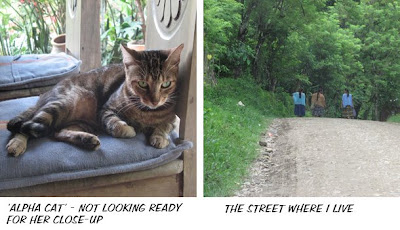 I’m posting some pictures of my various housemates – and one (especially for my brother – who is a big fan) of the largest moth I have ever seen. This one was in the shower; I put him out the window, before the ‘shower tarantula’ got him. Behemoth #1 used to love moths...
at 03:50

Thank you for this! I truly enjoyed reading it very much this morning (it took 3 cups of morning coffee – one extra than my usual two:-))
Yoga – it sounds like you’re settling in beautifully. I can’t wait to read your update re the Mayans and yoga lessons. This would be an achievement. Very exciting. Go for it!
Housemates – Wow hmmm…Speechless…how photogenic the handsome devils:-)! It’s impressive how you were able to handle it all and peacefully set your boundaries! Be safe!
(I can’t tell if you are a step closer in attempting to give them real names:-) and who's using the blue blanket now?)

Jane! Love love LOVE this blog! I would love to come for a visit and do yoga with you and the cow! It sounds absolutely lovely. Although, I don't know if this will ever happen because your some of your housemates scare the bejesus out of me.