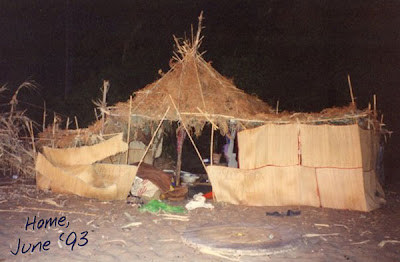 This time last year I was halfway through my Yoga Teacher Training and loving every minute of it. When I wasn’t doing yoga I was teaching rich honeymooners to dive – but not many of them, as Mexico was in the midst of the Swine Flu tourist-draught.

The year before that I was back in London, saving hard and flipping coins as to where to go next. Two years before that I was meandering in Costa Rica, running out of money and coming to terms with the fact that I would soon be returning to the UK.

In May of the year before that, I was living in Honduras, diving, bartending and living by the beach. The year before that, in May, I had recently arrived in Guatemala and was falling in love with the same village that I left just a few months ago. The year before that I was in Canada, living in Victoria, taking great long walks along the sea front, with my state-of-the-art, only recently invented MP3 player (which had it’s own bag – it was too big and too heavy to fit in my pocket!)

In May of the year before that, I was living in London with two wonderful friends – good times. One of those lovely women is getting married this summer – I can’t wait!

Early May, of the year before that, I was in Indonesia. A much less travelled Indonesia than it is now. I was travelling with a man who was the most handsome of my previous boyfriends and also the tallest. We went to places where just being white and foreign was enough to make us celebrities. My boyfriend, at 6’4” was also a giant, from whom small children would run screaming. They would come back of course, but run screaming again if he took off his shirt – he had a hairy chest, which is unheard of amongst Asian men. I remember a young man of about 18, who was clearly sick with jealousy, politely asking if he could touch Andrew’s chest. Andrew, somewhat mollified, said yes. The boy touched the hair tentatively, and then nodded approvingly.
“I am going to buy one like that” he said, “I can buy one in Lombok.”
We told him we had been to Lombok and it was lovely, but we hadn’t seen any chest hair.
“Really?” said the boy in surprise “but I have heard, that in Lombok, everybody is a rock star.”

The year before that I was on a fishing boat somewhere in the Gulf of Carpentaria. That year I worked a season on a prawn trawler out of Darwin. One night our nets were attacked by sharks, which didn’t happen often. We pulled the nets in at dawn and in the half-light, as the nets came to the surface, I saw the water churning and frothing with, maybe 60, sharks. It was one of the most extraordinary scenes I’ve ever witnessed. When the nets came out of the water, the few remaining fish fell out – the nets were full of holes. Our skipper was apoplectic with fury and launched into a tirade against sharks, holes, nets and his crew (rather unfairly, I thought). He said the boat was a "useless tub of shit" until those nets were fixed and back in the water, then he went to bed. We five, pulled in the outriggers and hung the nets off them like vast blue curtains. The biggest hole was a metre across. So we set about sewing up the holes – it took us 20 hours – then we got back to work. A few months later I got off that boat fitter, stronger, browner and blonder than I had ever been.

The year before that I was in London, feeling anxious: I was about to embark on my first long-term, solo trip and I was very concerned about having the right stuff. I had decided to buy a new backpack – a proper one. Cheap backpacks, as every traveller knows, are a false economy. The straps cut into your shoulders and then break. I spent most of this month choosing. My final choice was £85, making it the most expensive item I had ever purchased. When I handed over the money I remember thinking that that I would be wearing this bag for a whole year. That trip lasted 2½ years, and I’ve worn that backpack for many, many more.

At this time, early May, of the year before that, I was I was doing my Finals at University. My friends were all worrying about jobs, but I did not apply for a single one. I knew what I was going to do – I was going to travel. A week after my exams ended I packed up my student digs and cleared out my bank account. I bought a one-way ticket to Athens and the cheapest backpack I could find. I left with the country with £60 in my pocket. My dad remembers me saying that I would be away for 3 years! My dad privately told my mum not to worry, that I would be back by Christmas! He was right – I was back in November.

During that summer, a fat man in a very expensive white suit approached me in a bar in Paxos. He had four bodyguards with him, all in matching black suits. I was told later, by the owner of the bar, that this man was a Godfather in the Greek Mafia. He offered me a job, on his private island:
“Doing what?” I asked
“I don’t know” he replied “what are you good at?”
I politely declined his offer.
“Don’t you have a sense of adventure?” he said “what are you going to do instead?”
I shrugged. “I don’t know,” I said “but I’ll think of something.”
at 13:08

I am so impressed that you can remember that far back! I can't even remember what I did last Friday!

I made a weak attempt to do this exercise, because my old noggin' needs to play these memory games every now and then, but I only got as far back as 2004.

Like I said...weak. At least I know which country I was living in at the time....that's gotta count for something.

Wow - amazing list of travel memories to look back on, Hon! Here's to the next lot! Nx

Hopefully in the UK - maybe even London (or close to!) Nx

how to talk dirty to a guy said...

you've seen the world...what am i still doing here? i feel trapped i like to be free..

it is great post. nice post. Did you know that you need to see your dentist in San Jose at least twice in a year? While this habit ensures that teeth are healthy, not many people follow it. thank you best
dentist in cancun