I woke this morning to see sunlight filtering through my curtains – it was very exciting. I sent a text to the dive shop to see if the boat was going out; made arrangements to meet a friend for brunch; the day was full of promise... then someone turned the lights out and the taps on. Yes readers, it is rainy season – occasionally it can be sunny and fresh, but mostly it’s dark, grey and the rain is coming down in sheets. Monsoon: the kind of rain that will soak you to the skin before you’ve even reached the front gate.

Usually the rain is accompanied by a crazy wind – leaving a café the other evening, I was nearly swept off my feet! There’s no escape from the Habagat (wind) because all the shops and restaurants barricade themselves in to keep the sand at bay. Walking down the beach is braving a wind-tunnel gauntlet: there are 10m high windbreaks on your right and boards and screens to your left. The sand whips past, stinging and blinding. Bah! Some tropical paradise! There are rumours of a typhoon coming... I have mixed feelings: part of me actually wants to experience a typhoon; the other part knows it will be horrible and inevitably some (or many) will loose their houses.

From the Lookout, at the top of The Hill, you can clearly see that Boracay is really two small islands joined by low spit of land, practically a sand bar. I live on the sand bar and we are frequently flooded. Around me it’s rarely above ankle deep, but in the centre of the island it has reached mid-calf-nearly-knees a few times. Many of the houses are not linked to any sewage system, so I resist thinking about what I might be walking in. Many buildings are raised, but not all. There are a few houses around the corner, who are living ankle deep in water. They appear to carry on regardless: a few days ago I saw a family in their flooded kitchen, sitting around the table having supper. I suppose there's not much else they can do.

Yesterday, there was a large bull tied up next to the path – complete with horns – I think he usually lives in the swamp, which is currently the lagoon. I was a bit scared! Bulls are always larger than one is mentally prepared for. I hovered on the path for a few minutes, then a couple of small children waltzed past – so I thought perhaps I could handle it.

People try to time their comings and goings with the weather. When it starts getting grey we decide: do I need to be anywhere else in the near future? If yes, move now! It is always a tragedy to get stuck in a bar for the whole evening! When the rain stops, people emerge from their shelter, blinking at the sun like little bears in the spring.

Still, only a few more weeks, then paradise will resume... but I wish I taken Mrs Botogol’s advice and bought those wellies! 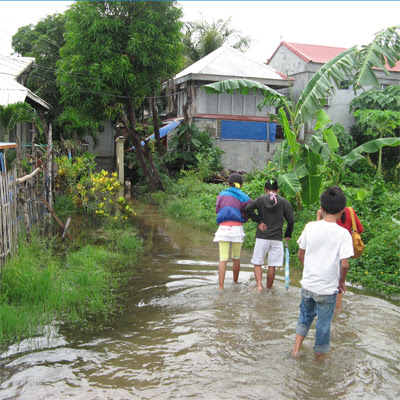 Just got all excited: someone left a comment on my blog! "What could it be?" I mused. The name was unfamilier - so it's not just one of my friends leaving a 'sympathy comment' (not that I get many of those). It's a stranger! Someone, that I don't know, has checked-out my blog (wow) and it has inspired them to think something! Something that they wish to communicate. Fantastic! I didn't look at it straight away - I had some emails to reply to, so I decided to do that first and save the mysterious comment for later.

Just checked it out. It was a link to an adult videos website. Life is full of cruel disappointments. Blogging is standing on a big stage in a dark auditorium - talking blithely to the darkness.
at 08:07 3 comments:

How can I help you today?

I was reading a very interesting article in a Filipino magazine over breakfast. It was all about Call Centres. Call Centres are one of the fastest growing industries in the Philippines. There is even a Call Centre ‘district’ in Manila! It is estimated that 300,000 Filipinos are currently employed and the industry growth rate was 100% last year.

I am sure none of this will surprise you! When I was last in the UK I heard Call Centres often discussed with a view to how irritating it is to be transferred to Delhi/Islamabad/Manila when you have a simple question about the branch in Ealing. One bank, I noticed, is even using “UK Only Call Centres” as the major tagline on their latest ads.

Here in the Philippines, Call Centres have also caused some consternation. You see, at p16,000/month, the pay offered is twice that of the average graduate salary (p8,000/month). Most of the employees are, therefore, fresh from University and the crème de la crème! The job is so staggeringly well paid because it is considered to be a “high stress” job. Employees are expected to learn the internal workings of a company they have never even heard of, and the specifications of all their products upon starting. More importantly, they are expected to speak fluent, business-quality English – as well as understanding a variety of dialects, accents, colloquialisms and slang (again, from a country most will know very little about). They must also cope with different customs and culture – British and North Americans interact with considerably less courtesy and formality than Asians. Worst of all, they must deal with customers being (as the article put it) “unreasonably angry”!

And they must do all of this in the middle of the night. Filipinos don’t work at night – apart from Night Watchman of course! Certainly bright Filipino graduates don’t work at night, and nor do their friends. As a consequence, Call Centre workers are becoming increasingly isolated (and alienated) from their friends, family and normal life. One Insider Source, went so far as to say,

"We must do a better job of preparing people to enter the industry. It would be helpful to look at Call Centre employees as a new section of society"

So what is the result of this new sub-culture of young, rich, nocturnal Filipinos? I am imagining they might be cultural cousins of the “Loadsamoney” characters we had in the UK during the booming 80’s, who also worked long and often unsociable hours. Bright, young, vibrant and more money than sense! I can also affirm, as one who has experience of nocturnal life, it does distance you from the conventions of society. You eat, sleep and socialise at different times from everyone else, except your colleagues. I remember a birthday party in Sydney where we (nightclub workers) were shocked to discover the restaurant wasn’t serving a full menu – it was 8am. After only a short time your work colleagues are, inevitably, the only people you see and this leads to a strong clique mentality – from here, it is only a small step to creating your own group customs and conventions. In the Call Centre district of Manila, according to Marvie, a 22 year old from Makati, “it has led to a corruption of values”. Our Industry Insider put it even more succinctly:

“Imagine being young, working with many others your own age, doing stressful work in the small hours of the morning while earning more money than you ever have before. These conditions create opportunities for casual sex and philandering.”

Of course, since they only speak to each other and their western clients – it wouldn’t have taken long before they started integrating Western slang and style into their close-knit clique. And not long after that, come the ethics.

The Philippines is a strict Catholic country. The use of birth control by married couples is still sniffed-at by many. However, the convenience stores in the Call Centre district have reported a 35% increase in sales of condoms and 'vaginal wash' this year. Taxi drivers are reporting numerous occasions when they will collect workers at the end of a shift and take them directly to a motel. Some are accusing the Call Centres of corrupting the traditional roles of the virtuous Filipina and the caring Pinoy man. As casual sex becomes more and more prevalent (and therefore acceptable within the group), male workers are reporting that their female colleagues are becoming sexually aggressive and more confident than is proper! The article reported many cases of workers having multiple partners within the same office, and also stated that the same problems have been reported in India, where some have even called for mandatory HIV tests for all Call Centre employees. Here in the Philippines the possibility of giving free lessons in Safe Sex to all new employees is being discussed. One wonders how long it will take them to discover cocaine.
at 08:05 1 comment: