Ten things I love about the Philippines:

[1] I love the way shop assistants tell you what you're looking at while you shop:

I never know what to reply?

[2] I love that the advertising is still honest: a brand of Filipino hot-dog sausages were having a special promotion last week. Their slogan was:

"New & improved! Now you can eat more
than two without feeling sick!"

[3] I love the way Filipinos always offer to share their food... [especially hot-dogs!] and that it is rude to say No! It can be awkward, a few days ago I had to sit down to sticky rice pudding with condensed milk straight after a big lunch. It was a struggle!

[4] I love that the ocean is so changeable and incomprehensibly unpredictable. Currents can change direction in moments, conditions are impossible to predict and you never know what you might see. On any given dive you might see sharks, turtles, tuna, marlin... or absolutely nothing.

[5] The sexual & platonic liberation: Transvestites are no big deal over here - no-one bats an eye-lid. Gay couples are never stared at or harassed - it wouldn't even cross people's minds. I have even come to appreciate the blatant prostitution - it's in your face, but at least it's honest. Saw a hooker recently wearing a tee-shirt that read: "cheap, safe and friendly" [grin] I also love the platonic liberation - male friends think nothing of having an arm around one-another or holding hands. Filipinos are tactile and it's just friendly. I like that.

[6] I love that when it rains it comes down in sheets and floods the streets in minutes. Then it stops abruptly and paradise resumes.

[7] Being called Jane! Obviously I like being called Jane everywhere I go - but over here they know the name! Having a name that is mostly a vowel sound and starts with a J can be problematic. In other places I have been variously known as: Shin, Yayne, Hanay, Gin, Zeen, Jiyne... the list is endless! But Jane is also a Filipino name! So far I have met two: little Jane from the shop [she's 8] thinks it's great that I have a 'Filipino name' and as a consequence we have a daily ritual of:

Which she finds endlessly amusing and I have become resigned to! [I'm joking, she's a lovely child, I like her.]

[8] I love the way when Filipinos drink alcohol, they drink from the same cup! They poor a shot, the first person drinks, then passes the bottle & cup on to the next person. [They also drink all their spirits neat, with a water chaser.]

[9] I love Taglish! Officially the language here is Tagalog, the second language is English. Unofficially everyone speaks Taglish. In Taglish all numbers plus certain phrases are English. For example: I caught the local TV news last night. A man was giving a statement, it went something like this:

[10] Black-outs: The power goes out here a lot. Usually every day, usually a few times a day. I don't love that [grin]. What I love is the way Filipinos react - it's like hitting a pause button. Remember musical statues? It's like that! The moment the power goes, everyone stops - street sellers sit down and waitresses stand still - I was in the Deli the other evening when the power went, the Deli has a back-up generator so they still had light, but none-the-less the Assistant stopped making my cheese sandwich until the power came back on! When the power comes back everyone cheers!

Five things I hate about the Philippines

[1] Cockroaches. They are big, they are many and they are everywhere! Ugh. When they run around on my raffia-covered walls they make a rustling sound and sometimes I dream that things are crawling on me... "paranoia" you say? Yeah, that's what I keep telling myself too.

Until last night, I would have said the biggest were about 2" long. Big enough. Last night, I opened the door to get some air and something fell off the door onto my foot. From the weight of it, I thought it must be a lizard, but then it scuttled and I knew. Bravely, I ran away making a funny yelping sound, which I had no idea I could make. I glared from a distance - it was nearly 3" long. Eeurrgh. Fortunately, having recently certified as a Dive Instructor [hurrah!] I am in possession of a huge tome-ish Instructor Manual. I threw it. Nothing moved - victory was mine. Half an later curiosity got the better of me and I went back to check - the Manual had landed on it's body, pinning it to the ground [and crushing it surely?] but it's head was sticking out and it's whiskers were still moving! Arrrrgggghhhh! Bravely, I ran away. Fortunately, yesterday I had purchased a new bottle of water [I buy the giant ones that go onto office Water Dispensers] I put the water on top of the Manual and went to bed.

This morning the head was gone. I can think of two possibilities: [a] The monstrous cockroach, bench-pressed the Manual and the water and got himself out of there. [b] There were sufficient numbers of roaches in my room last night to eat the monsters head, leaving no trace.

I actually prefer to think he escaped.

I should have lifted the Manual and looked. But I didn't. I asked them to clean my room instead! Poor Lisa won't like it - but neither do I! "Cowardly!" you say? Yeah well... I saw 3 big sharks in the deep blue yesterday morning and felt nothing but exhilaration. We all have our limits.

[2] Electricity: The wiring here is awful. I electrocuted myself last week turning on a lamp. It threw me across the room and my arm was tingly until the next morning [sigh].

[3] Sleeping with a fan on: It's too windy! Obviously you can't sleep without it because you wake-up in a pool of sweat... but with it, I have anxious dreams about low-flying helicopters and wake up with a stiff neck. Boo.

[4] Can I say cockroaches again? They are by far the worst thing! And they fly! Do they usually fly? I don't think so. They don't fly very well, however, and sometimes crash into your head... ugh.

[5] OK, cockroaches three times is a bit much... there must be something else I hate? Nope, it's going to have to be cockroaches - I hate their whiskers/antennae or whatever they are. They twitch in a gross and sinister manner... did I mention they were everywhere? [sigh] 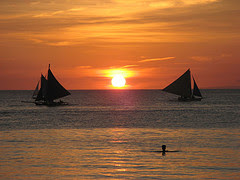 I hate cockroaches too. Waiting around to inherit the earth after a nuclear war. Pah! I like the sound of honest ads tho. Looks like lots to love about the place and you sound like you’re becoming a local. Nice! Send a South London 'Hi!' to little Jane!

i too would list cockroaches 3 times on the things i dislike about the philippines - they are absolutely nasty!!! ask bod about the little surprise in our bathroom in thailand our first night there :) if i were to add a few to the list...

good: big cold fresh buko, how helpful everyone is when you attempt to learn the local dialect, tricycles with cheesy bible sayings, 3 kinds of avocados, the crazy cloud formations that form and shift constantly.

bad: cockroaches, cafeterias where the food sits out in greasy beat-up pots all day, bus/moto exhaust, poverty, loudspeaker karaoke machines - even in the most isolated of places, sketchy old germans with their 17 year old filipino wives, cockroaches.

anyway. it's a great blog you've got going. i think that novel of yours is going to come along quite easily!

Great blog Jane, I can really relate.
I saw a Yellow Cab Pizza knock-off shop in Roxas the other day called "Yellow Box pizza", and their imaginitive slogan made me laugh: "Try it, it's good!"
People keep calling me Jane too, but my name isn't Jane! It's JEN. No-one seems to get it, for some reason.