I went to the Doctor last night [I've hurt my ears - boo.] The doctors here are excellent but the clinic is bereft: one tiny room which opens onto the street, in the corner there is screened cubicle for examinations. But other than that there's no privacy, no space, the patients sit on two benches, whilst the doctors sit on a plastic chair in front of them. We all listen to each others complaints and sometimes other patients will contribute their own thoughts on whatever ailment is being discussed. It is embarrassing and can be uncomfortable, but there is also a certain amount of solidarity between the sick!

On really busy days, the nurse will put a couple of plastic chairs on the pavement outside, where she will take blood pressure, etc, before the patient goes inside. Children often gather to watch.

Last night, however, there was only one other patient besides me: a little boy, about 7 years old, who had stepped on a Sea Urchin. It was awful - he was screaming. I don't mean frightened or frustrated screams... I mean real screams. Screams and sobs of pain and bewilderment. At one point he was shouting at his mother, who was also sobbing, I think he just couldn't grasp what was happening to him. I don't speak Tagalog, but I am pretty sure he was saying something like "make it stop".

An older lady, Grandma I expect, was also with them. When the mother couldn't cope anymore she stepped in to hold the boy still. He tried to fight her, to break free, but she silently gripped his wrists, whilst tears streamed down her impassive face.

The Doctor was very calm and patient, but I could see she was also becoming distressed by the situation. The little boys foot was starting to turn black and there were still spines to remove. He was getting more and more distressed, he was drenched in sweat, his hair sticking to his face, he eyes were becoming bloodshot and his distress was making it hard for him to breath. But the Doctor couldn't give him a break - the longer the spines stay in the more effect the poison will have.

In the street outside was a group of children - friends, brothers and sisters - silent brown faces with dark, round eyes. The littlest ones were trembling, but none of them ran away, they all stayed. There were others, people who had heard the screams as they walked by and stopped to see if they could help. The three women who run the food stall on the corner closed down and came and sat with the children. The nurses put some chairs out on the street and and a tiny girl, no more than three, curled up on a chair, sucking her thumb, with her other hand wrapped around her head, to shut out the noise.

My doctor, Jonas, grimaced at each new scream while we talked and he examined my ears. Before I left I asked about the little boy: "one more spine to go" he said and shrugged, "there's not really anything else we can do." I asked how frequent were Sea Urchin injuries. He said this was the ninth this month, but usually it's adults, "at least they understand" he said.

"Tonight," he gestured towards the boy and lowered his voice "only three spines. Two weeks ago, a man came in, I must remove 33 spines from his feet, it take more than 3 hours, " he shook his head sorrowfully, "but he will be OK. 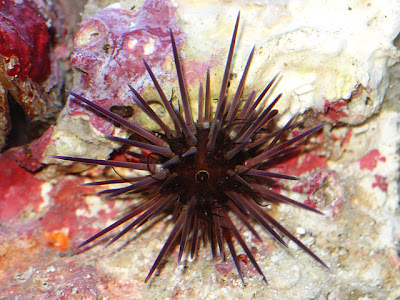 The strange thing is, as a diver, I see Sea Urchins everyday. They are no threat to me: I am not standing on the bottom and they don't move [during the day]. I quite like them. They are pretty - often the colours are beautiful. I know they are poisonous and I always warn my customers not to touch them. But really I don't give them much thought. I think I'll see them differently now.
at 06:34

You see that's just why I don't like swimming in tropical waters. You don't get those in Gower.

Mind you I once trod on something very painful in the sea off Galicia.

Ear injury sounds nasty. Well I guess it sounds silent (ha ha). Is that from diving? be careful.

OUCH! That poor little boy. Sea Urchins - never heard of them but they look like sea mines. Hope the ears get better v,v soon.
Nicsxx