"So how about that stingray? He was cool, wasn’t he?" I asked.
"Yes great! But there was a much bigger one at the beginning, while we were coming down the line. This one was different though," replied my customer, with a puzzled frown.
"Really? How so?"

There are a number of different kinds of rays: your ‘common & garden’ Southern Stingray (above) is the one we see most often. They’re very slick, light grey, very fast – but nervous, so sadly you don’t usually see them for long.

There are other rays though: occasionally around here I’ve seen a Marble Ray, they are bigger and very UFO-ish. Last year, in the Philippines, I was in the pathway of a very startled Marble Ray, it came racing up a wall straight at me – I remember hovering, wide-eyed, completely unable to identify what I was looking at – for a moment I thought I might of been in a real-life Abyss scenario!

Further south they sometimes see Eagle Rays, I used to see them fairly often in Honduras, but since then (6 years ago) I think I’ve only seen two. I’ve never seen one here in Mexico. They’re pretty spectacular. Of course the King of the Rays is the mighty Manta. I’ve only ever seen four of those – unforgettable, gentle giants of the ocean. Related to Mantas are the smaller Devil Rays – they sound scary, but they’re just smaller Mantas, very mellow.

"So what did it look like? What shape was it?"
"Fatter than the other one we saw and it was dark red, with spots I think, and... well... you’re going to think I’m crazy, but it’s head kind of looked like a bird! I think it had a sort of beak!"
"A Spotted Eagle Ray. You saw a Spotted Eagle Ray..." I struggled to keep the resentment and jelousy out of my voice, "where was it?"
"It was very close! It swam right behind you!"
"A Spotted Eagle Ray swam right behind me?" Too brisk, be polite!
"Yes, it was big! Bigger than you! About 6 feet! Are they usually that big?"
"No." I swallowed, "so, a two-metre Spotted Eagle Ray swam right behind me? That’s very big. I haven’t seen an Eagle Ray for well over a year."
"Really? It was quite amazing looking!" he gushed with a broad grin.
"Yes, they are, fantastic. I wish I’d seen it." There was an awkward pause.
"Oh!" The penny dropped. "Oh... I probably should have pointed it out, shouldn’t I?"
"That would have been nice, but never mind." I said, insincerely.
"Oh well. I guess I was lucky!" 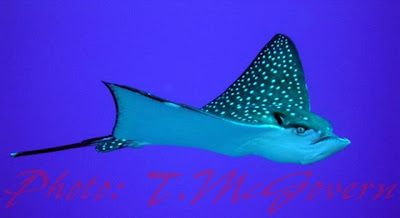 Two bloody metres! He saw a two-metre Spotted Eagle Ray and he didn’t think to point it out! The reason it swam right behind me, without me noticing, is because I’ve got to keep looking at him! Bloody customers! I mean, what was he thinking? Even if you know nothing about aquatic life, surely if you saw a red, bird-like creature, with the head of an eagle and a two-bloody-metre wingspan, you’d think that it would be worth a casual nod in the general direction, wouldn’t you? You can’t seriously be expecting to see that when you sign up for your Discover Scuba experience. Surely, you would point and give the appropriate hand signal for ‘what the be-jesus is that?!' Or indeed any hand signal, or a wave, or flap your arms, or at the very least you would stare with big eyes and an open mouth! Wouldn’t you?

I remember coming down the line with him very clearly; he was perfectly calm the whole way. He showed no signs of surprise or alarm. At which point do you think he saw the red, spotted ray, with a head of an eagle and a two-metre wingspan?

Could he have been lying?

I enjoyed my first ever dive, but I have to say, if I had seen a two-metre Spotted Eagle Ray I would have been a bit alarmed. I definitely would have pointed it out to my Instructor. Could he have been lying? But he described it so well... and why would he make up something like that? To wind me up perhaps? He tipped though.