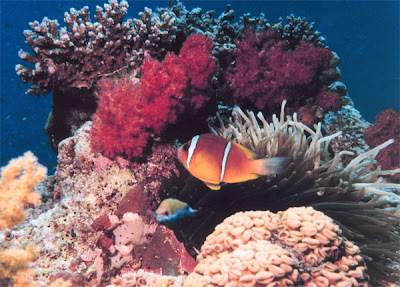 I’ve had some rotten customers this week. These people are typical of their nation – I know it is often perceived as racist to make observations based on peoples’ cultural identity these days... but these guys are typical... no! I better not.

There are six of them, I think I can say (without giving too much away) that the three men are all in their fifties and strut up and down the beach in tight Speedos, worn low at the front to accommodate their generous beer bellies and pulled up to the waist at the back to compensate. Their wives are all gorgeous, in their twenties and promenade in front of the sun-beds wearing g-strings and dripping with jewellery.

They all have brand new, top-quality diving equipment, which they transport in battered old suitcases – because (so they tell me) if they used proper dive bags, the baggage handlers at Moscow airport would steal the lot... ach! Darn it, now I’ve told you! Yes indeed, they are Russians. Very, very, very wealthy Russians and I have to say, they’re charming. Charming, polite and gracious, although their complements can be unusual. In the mornings, before they dive, my colleague and I set out all their dive gear with a bag in front, ready for them to pack.
“Thank-you Zhane,” says Dimitri “everything is in order,” nodding his well-groomed, solemn face and scratching his all-too-Slavic little pointy beard. Natasha smiles approvingly,
“yes,” she says “this is very neat.”

Above water they charming, ordered and courteous. They are always late, but I have discovered that rich people are all always late. On the whole, on the surface, they’re great. Underwater, they turn into demons.

The reef is a fragile environment: soft corals are in fact very soft; hard corals are really not that hard; many marine animals are coated in a transparent slime which protects them from infection. Touching is bad; touching the reef will damage it, leave it vulnerable and in some cases kill it. These guys touch everything! They touch and grab and poke and shake and pick up and steal! They even steal from the ocean! I want to kill them. They are all experienced divers and their buoyancy is good – but still they are kicking the reef below and behind them every time they stop to look at anything. They have no concern for the reef, but perhaps more strangely, they also have no concern for each other. Solo diving is not safe, we always dive in buddy-teams for safety and I always ask people to stay within sight of me (not least because I am leading the way!). These six swim off on their own, speed ahead or lag behind without considering the rest of the group or even their own buddy.

I have tried to talk to them about all of this; they smile and politely agree that they will not do any of these things. When they get into the water, once again, it’s a nightmare. When I spoke to them (again) about not damaging the reef, I was told not to worry because Valery is a Biologist and knows what he can touch safely. On the next dive I watched Valery swim into an overhang without first considering how he was going to get out. Stupid. On the way out he got stuck. There was a rather beautiful anemone beneath him and the overhang above was coated with hard coral. He should have carefully reversed and tried to slowly manoeuvre back the way he came – that was what I was frantically signalling him to do. Instead he gave me a cheerful wave and forced his way out, crushing the anemone and scraping his tank valve through the hard corals. I suspect that I will find both are dead next time I visit. Some biologist.

I just don’t understand it! That same dive they all came up saying how impressed they were with the exceptional corals – I wanted to scream,
“Do you have any comprehension of the damage you have done?”

Do they really simply not care? How can they not understand? It’s like all the Filipinos who bring their families to White Beach on a Sunday for a picnic – presumably because it’s so beautiful – and then leave all their cans, crisp packets, broken glass and the rest lying on the beach. I really don’t understand, but I find it so incredibly depressing. I actually lifted Olyssa up off the reef today, to stop her from kicking anything else. She was very offended – but what can I do? I can’t just watch. Except in the end, there’s not much else I can do. You can’t force people to care or to take care, can you?
at 04:28

...when I do SCBA training and people misbehave I shut their air off... :)

Don't let them get you down Jane... Assholes persist all around this wonderful globe of ours... as they will forever. Good for you for standing up to them. And take comfort in the vast number of respectful divers that you have the joy of shepherding around the oceans floor!

Oh dear. No good when the Russians are coming huh! Anyway, as annoying and imbeliic as these guys sound though, I suppose you just need to be even more thankful then that the majority of those that you take to the reef do respect it and show proper appreciation for it.

I knew their Nationality before you mentioned the airport. Kudos to me! I suppose you can't tell paying customers that they will be deducted 5 minutes each time they touch any bit of marine life. This concept works for children. :)

I bet they didn't leave any tip for you either!

I hear the Koreans are also bad with regards to taking things from the reef and damaging it.
And as for the picnickers, we are having a nightmare with them at the moment. They seem to have no comprehension of why we ask them to actually buy something if they want to use the chairs and tables at our bar. And then they leave all their crap behind for our staff to clean up.

I just returned from Sharm el Sheikh where the Russians arrive with more equipment than NASA and no concern whatsoever for anything in the water. All credit to the dive centre at the Four Seasons, though, when we complained about the damage they were doing, they were made to have private guides so they could be supervised more closely.

On the bright side, most of them can't stay down for more than 30 minutes, and a lot of them manage to kill themselves every year!