There are two places in Asia that are very famous for wreck diving: Truk Lagoon in Micronesia and Coron Bay in Palawan. The first wreck we dived in Coron (the 120m warship, Akitsushima) was bombed twice during the attack on Truk, but managed to escape, only to be repaired and then finally sunk in Coron Bay. How unlucky is that?

The Akitsushima was nearly ripped in half by the explosion, but the two halves remain surprisingly intact – as do all of the wrecks. It’s an eerie feeling to swim through cargo holds and engine rooms and see all the machinery and hardware still complete, albeit coral encrusted. Inside the Kogya Maru (a Japanese freighter carrying construction supplies, intended for building a runway) it appeared they had tried to plug a hole with cement sacks – we could see this clearly in the light coming through the much larger hole above us. However the human evidence of the attacks has presumably been recovered (or stolen? I hope recovered), as the only human remains we saw was a single arm bone lying next to the Akitsushima. 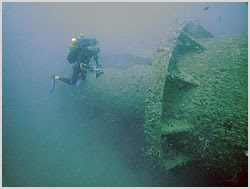 And this leads to my one reservation about the wrecks: I couldn’t help feeling somewhat voyeuristic, diving in a war grave. Perhaps this is also what makes it so exciting - that idea of a precise moment of time and history, captured and preserved by the ocean.

In my head I have so many perfect images: dropping down to 36 metres and looking up at the towering hulk of the Irako; peering through a hatch and seeing a very surprised looking grouper looking back at me; watching a blue-spotted stingray gently burying itself in the sand at the base of a massive propeller; the speckled light coming through jagged holes; a lone ladder dropping down into a deep, black shaft; schools of jacks gathering around the crows nest… such beauty in destruction.

I would go back tomorrow and dive them all again.

I should also mention Barracuda Lake, which was without doubt, the trippiest dive I have ever done! It is a fresh water lake, in the crater of an old volcano. The scenery is dramatic: the approach to the island reminded me of King Kong’s Island! It’s a forbidding, but sunny, place. To get to the lake you must climb up and over some jagged rocks in full gear (I will never complain about shore diving again). And the dive! Blimey. On the surface the temperature is was 28ºC, we dropped and admired the same sheer cliff walls now underwater, at 12m we passed the first thermocline – a shimmering line across our vision and quickly I watched the temp gauge on my computer shoot up: 29…30…31….32….33…34……35…36ºC! Really! It was uncomfortably hot, I touched the wall of the lake and the sand was hot. Our guide was rubbing the sand, then suddenly a jet of hot water shot out… all very strange!

We kept descending: at about 25m the water turned into tea. Literally. There is a layer of tannin at the bottom of the lake. At 30 metres it was so stewed we lost our guide – he was no more than 50cm in front… and then gone. I was with two others – I held on to Claire! The other girl was a Divemaster, so I didn’t hold on to her – but she stayed very close. At 33m I could not longer see my hand in front of my face! It was absolutely black. And that was as far as I was prepared to go!