It is the nature of the world that all things must change, but there has been one particular development over the last few years that is causing me some considerable concern. Ladies and gentleman, have you noticed that sandwiches are getting fatter?

The sandwich was famously named after John Montagu, the 4th Earl of Sandwich (how sad that they didn’t end up being known as Geralds – as Blackadder mis-predicted – or indeed Montys. One can’t help thinking that daily life would be a little richer if lunch consisted of a nice cheese & tomato monty.) 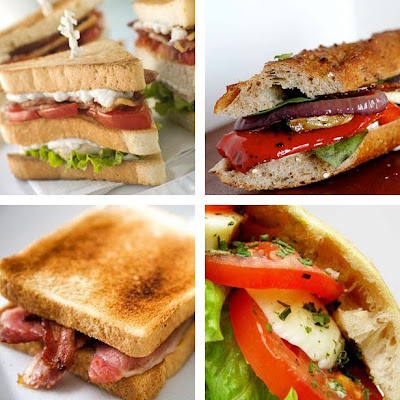 Until writing this blog, I was under the impression that the Earl of Sandwich invented sandwiches so his troops could eat whilst marching. What kind of cold-hearted scoundrel won’t let his men sit down for lunch? However, I did my homework and it seems Montagu didn’t invent the sandwich – he just liked them. The Earl was actually an entirely different kind of scoundrel – he was an incorrigible gambler. He ordered his meat served between two slices of bread so he could eat, without having to leave the gaming table or getting his hands (and his cards) greasy. It seems he was also a bit of a trendsetter since, after he ate them, everyone else asked for “one like Sandwich”. Et voila y mange tout – the cult of the Sandwich was born.

In the years following, the sandwich has become a touchstone of modern life: even now, if one strolls the streets (of the West) at around 1pm, one can see numerous office workers clutching their little bread-wrapped parcels of goodness.

In the last few years, as Western Society’s taste for novelty has grown, the sandwich (and everything else) has suffered many mutations. First we had those ‘open sandwiches’ – which, as we all know, is just a posh way of saying ‘on toast’. (Anyone for a baked bean, toasted open sandwich?) Around the same time, from across the Atlantic, came the ridiculous ‘Club’. I am not a fan. I ask you? Who needs three slices of bread in their sandwich? Surely the purpose of the bread is to contain the filling – this third, central slice is both redundant and wasteful. More importantly, it set a precedent for a new thickness of sandwich.

Not long before I left England last time, one major sandwich retailer had started selling Breadless Sandwiches. I was always under the impression these were called ‘Salads’ – but it’s all about the branding I suppose. 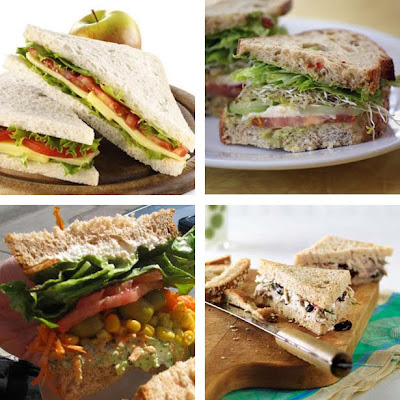 However, in general the evolution of the sandwich has resulted in bigger, over filled, thicker cut and overall: much, much fatter sandwiches. This causes a problem for me. Now, after careful study of my fellow human beings, I don’t believe that I have an especially small mouth. It’s seems to be of an average size – so I cannot believe I am alone in finding that most sandwiches I order these days are too big to bite!

So how are you supposed to eat them? I can see only two options:
This sandwich situation is a worry, and where will it end? Before long we’ll be eating ordinary salads with bread on the side – and then we might as well be French (not that’s there’s anything wrong with being French of course ;-)

Surely, if a sandwich-maker wants to make their sandwiches bigger or more substantial it would be wiser to bake larger loaves and make the sandwich wider, rather than fatter? Or give us an extra slice of bread and make a halfie? 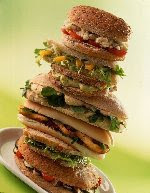 Here ye! Restaurants, cafes and humble sandwich shops – hear my plea! I want to be able to pick up my sandwich and eat it! I might want to march with it! I might even want to peruse the gaming tables with it! Let’s get back to basics and start serving monties that Sandwich would be proud of.

In the last nine days I have had five appointments with the dentist. Various parts of my mouth have been numb, swollen, painful or a combination of all three, all week. I’ve had one wisdom tooth out – (one more to follow) it had to be smashed up before it would come out. Boo. I haven’t been eating much. But eating, and the ease thereof, has been much on my mind.

I have to eat soft food – the other day, I thought a cheese sandwich might be appropriate (soft bread, of course, no crusts) – but even though this particular sandwich wasn’t especially fat by modern standards, it was still more than my poor jaw could handle. I had to deconstruct it, and in doing so I realised that there is no better example of ‘the whole being far greater than the sum of its parts’ than the cheese sandwich. I love cheese, and I enjoy lettuce, tomato and mustard. But whilst a cheese sandwich is one of favourite vittles, the components of a cheese sandwich, eaten separately, are a bit rubbish (except the actual cheese, of course). Hence this blog.

My dentist is very professional, and a nice, apologetic chap. He apologises after every appointment! As I left on Thursday he said, “sorry... for, you know, everything”
“For pulling my tooth out?”
“Well... yes”
“Or the dental work in general?”
“Well... yes. Sorry.”
“That’s alright, it is why I’m here!” He sighed, in an ‘it-hurts-me-more-than-it’s-hurts-you’ kind of way.
“I made another appointment for you on Monday – is that ok? Sorry. The other side will probably be easier... well... definitely quicker!”
And I replied: “Dentist, do not try to frighten me as if I were some feeble child or woman without knowledge of war’s work. No, I know about fighting and the killing of men well enough. I know how to swing the tan ox-hide of my shield to the right, I know how to swing it to the left – that I call true shield fighting. I know how to charge into the fury of speeding chariots. I know the steps of Ares’ deadly dance in the close fighting. But on your guard now – great man that you are, I do not want to hit you with a sneaking shot, with an eye for my chance, but in an open fight, like this, if this strikes home...”

Okay, I didn’t say that. But The Iliad is ever so good, by the way!

While researching this delicious subject I discovered that there exists a British Sandwich Association (of course there does) whose aims include: “To promote excellence and innovation in sandwich making.” They also have a whole page of Recipes for Cheese Sandwiches, which is as wonderful as it is unbelievable.

Finally, for some truly marvellous musings on the psychology of sandwiches (yes, really) you must read this: The Secret Language of Sandwiches.
at 20:04

At the suggestion of the wise Mr Botogol - who pointed out that keeping my Book List on various scraps of paper, stuffed into the back cover of my diary, is not especially secure - I have joined Library Thing. I will endeavour to upload my complete and total reading list... but it's going to take a while!

So for now, 2007 onwards is complete. If you're interested, or would like to Befriend My Books, you'll find a link in the Side Bar (to your right).

love the sandwich entry :o) i agree completely, except the iliad was too much like a forced march for me to finish

let's hope they don't go bankrupt and lose all your data :-)

I think there is an embedded subliminal in this blog post Outside-Jane as I rushed to my kitchen and made a cheese tomatoes sandwich right after reading it!
Long live delicious postings :-)

Mmmmmmmm, cheese & tomato sandwich... I'd have another one if I were you!

I would like to pipe up in defense of the Club Sandwich! It's a fine noble creature, and one of my personal favourites! Surely, Jane, anything with bacon in it can't be bad!! And the extra slice of bread is there merely for structural support. With so much fun going on in there with your multiple meats, a little re-stablising is just common sense.

I think you need to rethink this prejudice, Jane. I'd hate to think you're missing out on something so wonderful!!