So I’ve been back in the UK for nearly two months now – potential blog topics have come and gone – the problem being that things that seem so novelty, so intriguing at first glance become mundane after a very short time. The most amazing thing when I first returned was supermarkets. I remember sitting in a bar in the Philippines not so long ago, chatting with a Filipino friend about them – I told him that in British supermarkets there is sometimes 10 or 15 aisles stretching from here all the way to the beach (he looked unconvinced) I told him that one of those aisles would contain every kind of fruit and vegetable you could imagine and another aisle would be completely filled with breakfast cereal! He laughed; "No" he said, "it is not possible!"

My first trip to Sainsburys was amazing, I was like a small child let loose in a sweet shop, or a person who lives in the developing world let loose in a supermarket. But now... well, in the end I was raised here and although I still make an effort to appreciate just how lucky I am, it all seems very normal. My trips to Sainsburys are no longer accompanied by breathless excitement, which I expect my Dad is quite pleased about.

Bird song, also, swept me off my feet. My little island paradise was too small for birds. The first morning I was awake at some ridiculous time, open mouthed wondering what on earth was making that strange noise. It took more than a few awakening moments to realise it was the dawn chorus. For nearly a week the dawn chorus would wake me up, but now my brain has remembered it and filters it out and I awake feeling slovenly at about 9am instead. Whilst in France recently I was cycling through a small farm one morning and was startled by the sound of a cockerel. It was like a flashback: in the Philippines Cock Fighting is a national sport – there were at least 200 cockerels living within 50 metres of my home. For months, when I first arrived in the Philippines, they would keep me awake night and day until I got used it. Hearing that cockerel in France took me right back to early furious morning dreams in Malapascua, when I would awake desperate to get my hands on a machine gun to enact some poultry carnage.

But there is one area where the novelty hasn’t worn off and that is trees. Trees are fantastic. On Boracay there is scrub or Palm Trees. Now don’t get me wrong – the palm tree is a glorious thing – tall and elegant, moving as one with the elements. But in the UK are trees are so much richer: from the window right now I can see an immense Weeping Willow, maybe 10 metres high, it towers above the surrounding houses like a benevolent deity. I never understood the human propensity to worship an insubstantial spirit that can’t be seen or imagined, but Animism I understand very well. In our local market town, standing on either side and dwarfing a capacious Church are two magnificent Beech Trees. They must be 20 metres high, verdant and buxom. They delight me every time I pass by.

It has made me think that I perhaps should add another requirement to my ever-lengthening list of stipulations for the place where I eventually settle: it should be somewhere that gives good tree.

I have just returned from a camping trip in France (excellent trees) and two things struck me about La France. Firstly, that it is just so goddamn French. You see none of the generic 'western' architecture and shop fronts that you see in so many places. Perhaps the cities are different, but in the countryside where I was, there is no mistaking, not for one minute, which country you are in. That impressed me – in a world of increasing global homogenisation, le Français are hanging on with considerable perseverance to their national identity. Vive La France!

However the other thing I noticed is that the indubitable inhabitants are strangely invisible! Where are all the French people? We stayed just outside a picturesque little town with a fully stocked main street and square, but each time I cycled around it I expected to see tumbleweed drifting down the street – where is everyone? At night there is a populace but where to they all go during daylight? And I include weekends in this.

There have been other delights this summer: French cheese was every bit as delicious as I remembered – and all my clothes have now shrunk as a result. And I was excited to find a wild crayfish in a river in France. Wild? It was furious. (Was I so delighted by the crayfish because it's a marine animal? The first one I've seen in a while and oh yes, I am missing my oceanic friends.) Hot showers remain the crowning triumph of the First World (and the corporate-driven Media remain our greatest disgrace). I must admit wearing jeans again is kind of nice and even long sleeves have some novelty value. The long evenings would be great if we could be outside enjoying them - but that's British summers for you.

Now, as the summer draws to an end, I suppose I must start thinking about all the things I want to do before I leave and, of course, where to go next. It seems the job I was hoping for, for next season, will not be available... and so the doors are open once again. Where next? Back to the Philippines or is it, perhaps, time for something completely different? After all, the world is my crayfish! 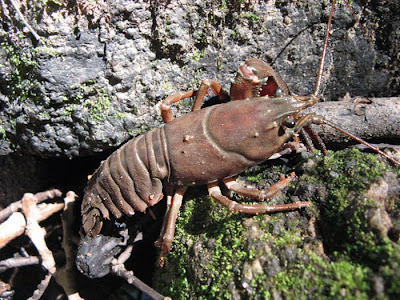 Hi Jane
I had no idea you were such a good writer!!!! Love your Blog, especially the bit about supermarkets - i can so relate to that. When I was last in the UK my sister was mightily embarrassed by me taking pictures of Joseph in the shopping cart(which was of course overflowing). Good job the camera didn't catch Chris pushing the 2nd one behind (gulp)...
You really made me laugh - thanks
Helen (Boracay Hills)

Great to have you home for a while, stay as long as you can.