I go on holiday! Hurray! Once again I hear you ask:
"And what does a dive instructor who lives on a remote island do for her holidays?"
Once again I reply, "I’m going to an even more remote spot (note the absence of the word 'island') to do some diving!" Hurrah and hurray!

I am going to Tubbataha Reef for five whole days. Tubbataha: National Marine Park since 1988, UNESCO World Heritage Site since 1993 and unanimously agreed to be, not just the best diving in the Philippines, but some of the best in South East Asia. Hurrah, huzzah and hurray! 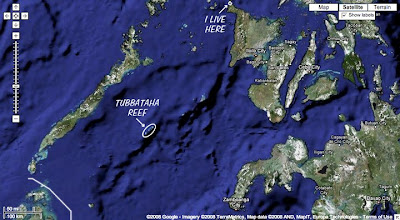 As you can see from the map (thanks Google) Tubbataha is an awful long way from anywhere else. Not just in distance… take another look at the map, note how many cities are marked, how many cities that are big enough to make the map. Not many. Palawan (the big island to the west) is remote. Tubbataha is the edge of the world.

And what do I hope to see? Well I am keeping everything crossed for hammerhead sharks. I have seen one, once before, and have never forgotten it... but that's another story! 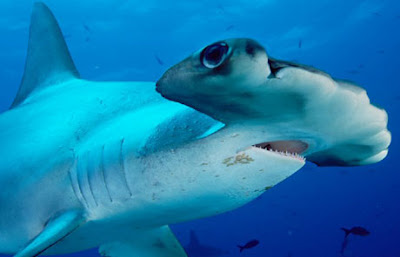 Some manta rays would also be fine. I expect to see lots and lots and lots of fish: the area has never been over-fished, because no one has ever lived there, and since 1988 there’s been no fishing at all. This is going to be the nearest thing to pristine that I have ever seen. Because there are no islands (just a few sandbanks at low tide) Tubbataha is home to many pelagic (big ocean-going) animals and as you can see from the map, there is a dramatic drop off very close by – the deeper the water, the bigger the fish. There are sometimes whale sharks and even (can I dare to hope?) whales seen at Tubbataha.

I plan to do four dives a day. I am told some will do five – but I am not sure if I can take that pace! I was anticipating doing at least one night dive... but when talking to a friend recently he cheerfully told me of his own experience:

"Of course the fish are drawn to your light and the sharks follow the fish," he said. "So don’t be surprised to turn your light and find yourself surrounded by very big sharks!" He grinned, "and they look so much bigger up-close and in the dark!"

Have a great time. Looking forward to the photos

Blimey - how did you learn about that remote Reef? Sounds amazing - but how can you fit in four dives a day? Hammerhead pix - YIKES! Run for the hills! Nx