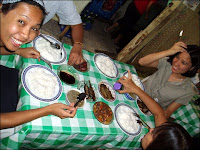 Traditionally, Filipinos eat with their hands – Malay style – they scoop a ball of rice with their clean hand and dip that into whatever sauce or dish they have. Of course times change and these days all Filipino restaurants provide their customers with cutlery, although I notice my Filipino work colleagues eat their packed lunches (rice and a little something) with their hands. We all take packed lunches to work; there are no budget food places at our end of the beach. I take a sandwich, and for the first week, one of my colleagues would always offer me some of her rice, obviously very concerned that I did not have a 'proper' meal. A meal is not a meal without rice, as everyone knows.

When Filipinos do use cutlery, they use a fork and a spoon. This was something that, for me, took a lot of getting used to. When I first arrived in the country I thought the waitress had made a mistake – being English, obviously I said nothing! After a while you realise that eating rice and sauce this way is much easier – but cutting meat with the edge of my spoon was something I struggled with for some time.

I've been here nearly 10 months now. I eat at a number of favourite local restaurants, with my fork and spoon and, honestly, it’s not something I’ve given any thought to for ages. Tourist restaurants will give you a knife, local places a spoon – one adjusts.

Then yesterday, I tried out a new Filipino café: looking at the menu, I was surprised to see "Bacon, eggs & baked beans on toast". Yum! Baked beans!

When the food came, it wasn't bad! The bread was sweet, of course. They had added sugar to the beans, of course (Filipinos like their beans and their spaghetti sauce very, very sweet) and the bacon was overdone, of course (English style bacon would be considered raw over here). But what really threw me was trying to eat it with a fork and spoon. It seemed, somehow wrong to be eating 'English food' in this way. I was all thumbs – just as I was back in January. Whilst trying to cut my bacon I flicked one rasher onto the neighbouring table. For some reason, I couldn’t work my fork and spoon! Suddenly I felt like a stranger in a strange land, once again. (Although, if I really want to feel 'foreign' I just think about Balut.)

It's the little things you see – the little things that catch you out. One of my English friends has recently started dating a Filipino. She has, of course, told him lots of things about her homeland, but only one thing has really startled him; caught his imagination and completely intrigued him... and that is brown eggs. He has never seen a brown egg and he is not entirely convinced that they exist. It’s always the little things.

The other day I was chatting with a friend from work (the one who kept offering me rice): she asked why I didn't live in England. I said that people in England spent too much time thinking about money. She considered this seriously and replied "here in the Philippines, we think mostly about food..." she thought for another moment and added "and enjoying our lives."
at 08:38

luv the pic.. great smiles.. tell your friend we have a chicken that lays green eggs (kinda turquoise)