I arrived at Marylebone at 4pm, left the station and walked towards Baker Street. Soon I’m on the massive Baker Street intersection where I nearly got run over in 1995. I was deep into a walkman-zone that day: bouncing along with my techno-house on full volume. Daydreaming and oblivious to my surroundings, I nearly stepped out into the on-coming traffic, and would have done, if an elderly gentleman hadn’t stopped me with his umbrella. I was startled and slightly disoriented for a moment.
“Do, excuse me,” he said “ I wasn’t sure... were actually trying to kill yourself?”
I assured him I wasn’t and said thank-you.
“Jolly good” he said cheerfully, the lights changed and we walked on.

I took a left turn onto Paddington Road and then right into Marylebone High Street to see how the rich people shop. Exotic delis, interior design stores and sexy little Boutiques with surprisingly few clothes – even the sandwich bars have chrome fittings. I worked around here back in 2000 – terrible – nowhere to buy lunch.

I reach Wigmore Street – do I turn left here or continue to Oxford Street? My foolish side decides to have a look at London’s busiest street. I last nearly 20 metres before wanting to shake my fists angrily at some stupid French tourists who come to complete stand-still in front of me, without warning. I step to the right to avoid hitting them and an American family crash into me. The French girls toss their Parisian ponytails and flounce away unrepentant. I take a sharp left back to Wigmore Street. There’s a couple standing at the corner:
“Or we could walk down Oxford Street?” says the girl, hopefully.
“No,” retorts the man “it’s just like this street except with thousands of idiots.”
Quite right. I set off down Wigmore enjoying my purposeful stride.

Turn right onto Regents street and take the first left, past a nice little Bar that does great food at lunchtime... now... how do I know that? When have I been there? I am still musing when I pass a familiar doorway. Ah yes, there’s a little Design Studio on the third floor. I can’t remember when I worked there, but my boss was very good looking, very charming and sadly, very married. But he used to take me out for lunch every Friday to that nice little bar around the corner.

Soon I’m back on Oxford Street, the marginally less packed end. I’m looking for a little shop near Tottenham Court Road. This shop does two things: they sell a wide selection of tweed flat-caps and they unlock mobile phones very cheaply. I find it – it’s still there. I peruse the caps while they unlock my phone and then continue on my way. 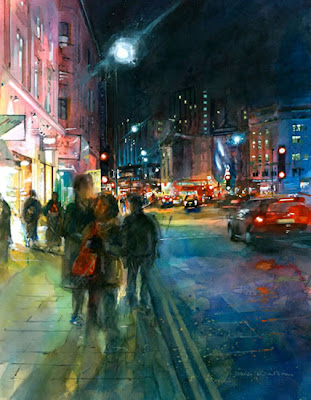 Right into Charing Cross Road, past The George, another favourite pub: one of those places where you know you’ll have a great night... so long as you don’t get mugged.

Next, Cambridge Circus, a gladiatorial arena where the game is as follows: Cambridge Circus has an eccentric traffic situation, many roads and many lanes, which follow no discernible system. No matter where you cross, no matter what colour the lights, when you are halfway across the road a vehicle (usually a black cab) will appear from some previously unseen side street and attempt to run you over. The trick, for those in the know, is to find some tourists heading your way and use them as a human shield.

I spotted a couple of suitably substantial Germans and trotted along side them, the woman gave a yelp of surprise when the black cab missed her by mere inches, but we all survived and I’m sure the sprint did them good.

Ahead of me are two narrow streets. I know that one of them will take me direct to Seven Dials and the other will lead me into the murky maze of back streets somewhere behind the London Graphics Centre. I take a guess... and a minute or so later I am lost amongst shadowy streets, dotted with abandoned Art Students. A left, then a right, I kind of recognise that bead shop, and yes! There is Seven Dials straight ahead.

The little pub I used to frequent is still there, but it seems they no longer allow people to take their drinks over the road and onto the mini roundabout to sit on the statue. That’s a shame – negotiating traffic whilst carrying a round of drinks is something everyone should try at least once. I stop for a quick coffee, for old times sake, at the Japanese-inspired basement coffee lounge, full of cool kids with astonishing hairstyles. Then it’s a right turn down Neal Street.

At the bottom of Neal Street, where the M&S is now, there used to be a veritable Palace of all things Kitsch. I don’t remember what the shop was called, but on the front was a row of plastic manikin legs, all doing the Can-Can. At 15 years old I thought that shop was the heighth of cool. M&S is no substitute.

I turn left down to Covent Garden and look for some street theatre. There’s a juggler – he’s not bad, a few good tricks, but nothing my brother couldn’t do. I was about to walk on, when he starts to do the same sequence, but this time juggling meat cleavers. That’s worth a look! Then he repeats the same sequence, with the cleavers, whilst riding a unicycle. For that, I give him some applause. But then he says those dreaded words “a volunteer” and it’s time for me to move along. I stop to listen to some opera singers – is there anywhere else in the world where opera singers busk? Sadly I only hear the end of their set, but they’re excellent.

I pass a Bar I used to visit often in my early 20s. It looks the same and I pop in to use the toilet. In the toilets are two girls applying make-up with industrial trowels.
“You know what” says one, between coats of high-gloss emulsion mascara “sometimes I don’t feel like going out, I’d rather stay in... but y’know, it’s gotta be done, innit?”
Her friend nods sagely, “you know what that is” she replies, “we’re getting old.”
They are no more than 22.

Back on the street, I am pleased to find the shop where I bought my backpack – the one I have been carrying around these last 14 years, is still there and still busy. Finally, I circle past the Ted Baker store (well I can dream can’t I?) before locating the pub where I will be meeting my two, delightful old friends (‘Oi! Less of the old’ I hear them grumble). I haven’t seen them for five years, so I’m looking forward to it.

Safely reunited, after a quick pint, we head over to a French Bistro style Restaurant for dinner. My companions, both of whom have vegetarian wives at home, order meat, followed by meat, with some meat on the side.
“Absolutely” says one friend, “and if they’d let me, I’d have sausages and chocolate for dessert!” As I order the goats cheese, my other friend, sighs in an ‘I’m-so-disappointed-with-you’ kind of way.
“Oh Jane” he says, “you’re such a girl.”

Dinner was excellent, and the company even better. Afterwards we head to a nearby subterranean bar, which serves delicious cocktails for exorbitant prices. Bizarrely, the three of us have a tradition of drinking in subterranean bars. As we settle in with our cocktails, my friend sniggers and points,
“Check out the DJs girlfriend” he says, “have you ever seen anything so bored!”
He’s not wrong. She’s wearing a sparkly top, but she couldn’t be any less sparkly without inducing a coma. She’s hunched and slouched on a little stool, motionless, glassy eyed, tedium and apathy oozing from very pore. Half an hour later my friend says,
“Have you noticed the music has got really good?” We agree and turn to look – oops! It seems the DJs girlfriend... is actually the DJ! And she’s very good. The bloke is now slouched on the stool at her side, looking equally bored and ever so slightly resentful.

It gets late, having said goodbye to one musketeer, I head back with the other to his new place. Safely back at his flat, we sit down for a nice cup of Earl Grey, and I admire their new chandeliers, before retiring to their very comfortable guest room, accompanied by their very friendly cat! How times have changed – back in the day, when we first became friends, I would have been lucky to get a warm beer night-cap, a musky sleeping bag and a bean bag on the living room floor! It seems some things really do get better with age!

And so, there ends my evening in The Big Smoke. Hello London! It’s been a while, but you’re looking well. It was good to see you again.
at 15:21

outside-jane
Barcelona, Spain
In 15 years of wandering, I visited 28 countries on five continents, climbed four volcanos, paddled in five oceans, dived with many sharks and successfully bribed a customs official. I have never seen a badger. I have witnessed an animal sacrifice, and seen a bear shit in the woods. I am an immigrant, and now a stranger to my own country. I like people who can spell. Dark chocolate makes me weak, crowds make me nervous, facts make me happy. I’ve been a Scuba Diving Instructor, taught Vinyasa Yoga and once spent four months at sea working on a Fishing Trawler. I fit into a standard-sized dive bag. I enjoy loitering without intent.

"You don't get reformed - you just run out of wind."
— Carlito's Way
"You do not know just what you've been forgiven"
— Anna Akhmatova